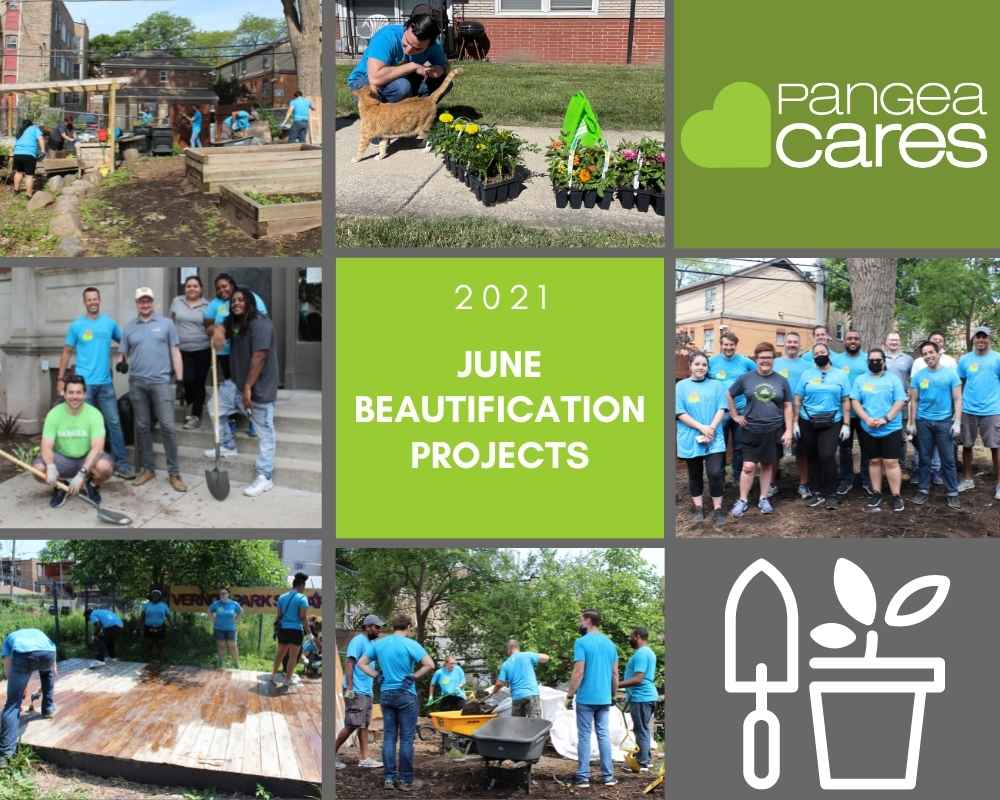 Pangea Properties, through its 501c3 arm Pangea Cares, brought together over 50 volunteers the first four weeks in June to do gardening and other beautification work on the south and west sides of Chicago.

Chicago, IL, July 20, 2021 –(PR.com)– Pangea Properties (Pangea) spent the first four Wednesdays in June giving back to several of the Chicago communities they own and operate in. Pangea’s community service arm, Pangea Cares (a 501c3 nonprofit organization), organized three days of volunteering in June for volunteers to meet up and complete outdoor projects in some of Chicago’s south and west neighborhoods.

The morning of June 2, a group of 15 got together on the 7000 block of South Merrill, the location of the South Merrill Community Gardens in the Jackson Park Highlands neighborhood. The volunteers spent a few hours tidying up the garden and getting it ready for use. They weeded and added new mulch to the garden beds where fresh herbs would be planted. They also built a new edge and fence around the front walkway between the sidewalk and the street, adding mulch to the area too.

Pangea Operations Manager, Kelsey Lake, was glad when Pangea Cares found a new place to volunteer. “We were thrilled to work with a new partner, South Merrill Community Gardens, as it sits so closely to many of our communities.” Lake then added, “We look forward to working with them again in the future!” Since the volunteer day, the garden has already been the host to an ongoing art project and a senior chair exercise class.

The next week, Pangea Cares joined Eco House – a nonprofit they have partnered with in the past – to help beautify Vernon Park Gardens on the 6000 block of South Vernon. Another 15 volunteers braved the heat and spent the morning on a few projects. Some did extensive weeding on the garden while others sanded and varnished a stage at the front of the garden that Pangea Cares volunteers built a few years ago. Pangea’s maintenance team also built an archway in the entry to be a welcoming opening to the garden.

Maggie Druffel, Pangea Marketing Manager, was a part of the Pangea Cares event at Vernon Park Gardens previously, when they helped Eco House build the stage they revarnished this year. “It is exciting to partner with Chicago Eco House again,” said Druffel. “I love going back to Vernon Park Gardens to see how our volunteer work has helped to keep the space running and looking great over the years.”

Finally, the next two Wednesdays – the 16th and 23rd – Pangea Cares spent time adding to the curb appeal of some of the buildings Pangea manages across the south and west sides of Chicago. Over 20 volunteers showed up over the two days, and some Pangea residents even joined in to plant flowers and clean up the front walks and entryways.

Pangea Cares is glad to be able to gather volunteers together again and plan regular events to support the Chicago, Indianapolis, and Baltimore communities.